Introduction to the High Arctic

High Arctic voyages operate during the Northern hemisphere summer, starting in May the season runs through until September when the shortening days and encroaching sea ice send most of  its inhabitants (wildlife and humans) south to warmer climes.
These voyages are operating in the vast reaches of the Canadian, Scandinavian and Russian Arctic often close to the Arctic Circle with one to the ‘Top of the World’ – the North Pole.

There are hundreds of sites of interest throughout the Arctic region.  In many ways the High Arctic has glacial scenery to match Antarctica, with massive glaciers and Icebergs found all through the region (Greenland, Svalbard (Spitsbergen) and Baffin Island).  Birdlife is far more varied than in Antarctica with guillemots, razorbills, puffins, terns, gulls, geese, ducks, phalaropes, curlew, sandpipers, owls and falcons (there are more). Other animals include: three species of seal, four species of whale, Arctic fox, Musk Ox, walrus, for the very fortunate Narwhal, and the stars of the show Polar bears.
As with the Antarctic the problem here is also not which sites (or voyage) to choose rather than which ones there is simply not enough time to include. 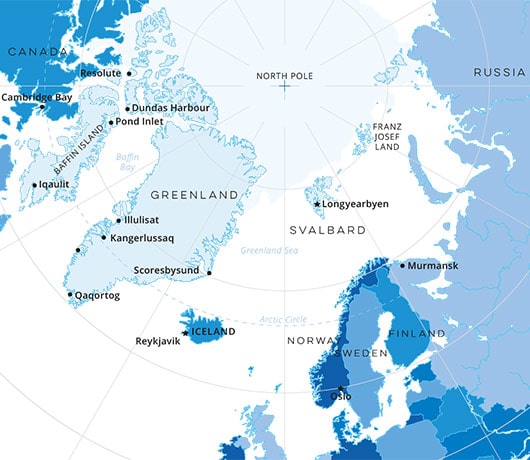 Highlights
A Selection of ships 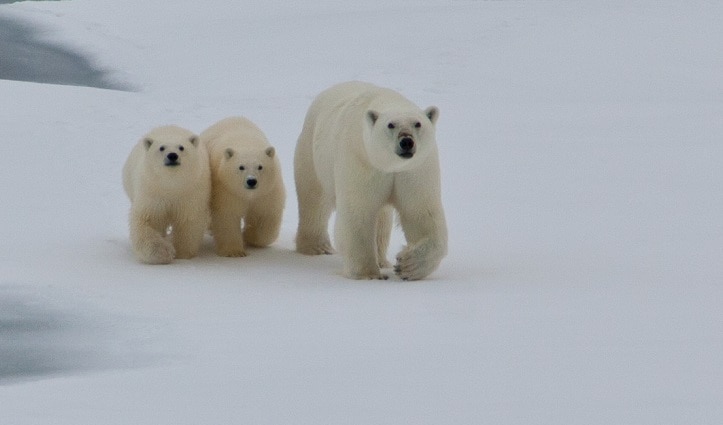 The best place to watch Polar bears is Svalbard, an archipelago of Islands almost 2,000km north of Iceland – way north of the Arctic Circle.  Most voyages that spend at least a week cruising around Spitsbergen, the largest island, will, with a little fortune, see them.  As with all wildlife viewing chance plays a part, occasionally many bears (up to 50) are found feeding on a washed up whale carcass.  More likley you’ll see a mother with one or two cubs, or a lone male patrolling his territory.  Occasionally they are encountered out at sea, where they are truly at home – as their Latin name (Ursus Maritimus) suggests they are marine mammals.

Your guides will ensure any sightings are safe, if bears are seen to be roaming a site where it was planned to go ashore the bears take preference.  A decent zoom lens or a good pair of binoculars are essential when heading to the Arctic. 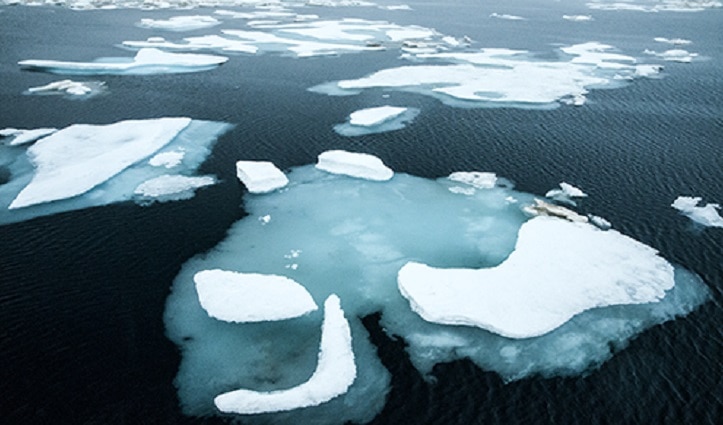 The Northwest Passage is a sea route connecting the Atlantic and Pacific Oceans via the Arctic Ocean.  For centuries explorers sought to find a navigable passage as a much shorter trade route. It was Norwegian Roald Amundsen who finally made the first complete passage which took most of three years (1903–1906) to complete.  The wildlife found throughout the region adds to the amazing history and ice; polar bears and with luck Beluga whales.  The historical interest, and the stories of Sir John Franklin’s ill-fated expedition in 1845-47 form part of any voyage.

Franklin made his last foray into the Arctic in 1845 with two ships (HMS Erebus & HMS Terror) and 129 men, never to be heard from again. The fate of the expedition remained a mystery until September 2014, when one of the vessels,HMS Erebus, was discovered in a remarkable state of preservation in the frigid waters of Victoria Strait.  There are many stories as to the fate of the 129 men, some are believed to have turned to cannibalism, others believed to have joined Inuit communities.  On-board ship historians will discuss these stories during any expedition. 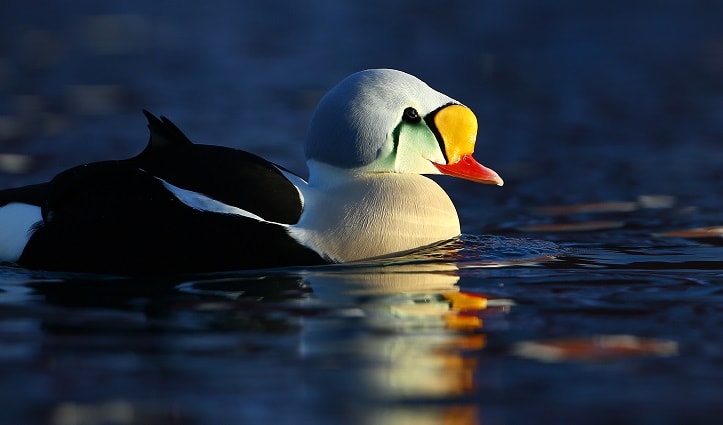 Birdlife in the High Arctic is far more varied than in Antarctica.  Here penguins are replaced by auks that can fly; guillemots (Brunnich’s and common), razorbills, little auks and likely the most loved, puffins.  Just as the nutrient rich waters of Antarctic support vast colonies of penguins down south, the Arctic is home to vast numbers of summer migrants.

Any keen birder will enjoy the incredible variety of birds that call the Arctic home for a few short months (June-August) and whilst they are not quite as fearless as birds in the Galapagos you get very close to many beautiful species; red-throated diver, grey phalarope, Arctic terns, northern fulmar (the closest thing to an albatross you get this far north) gulls (glaucous, ivory, Sabine’s & black-legged kittiwake ), geese (barnacle, pink footed and Brent), ducks (eider and King eider), snow bunting, rock ptarmigan, numerous species of waders including the purple sandpiper and for the very fortunate snowy owl and gyr falcon.  Expert guides accompany you to ensure you don’t miss out. 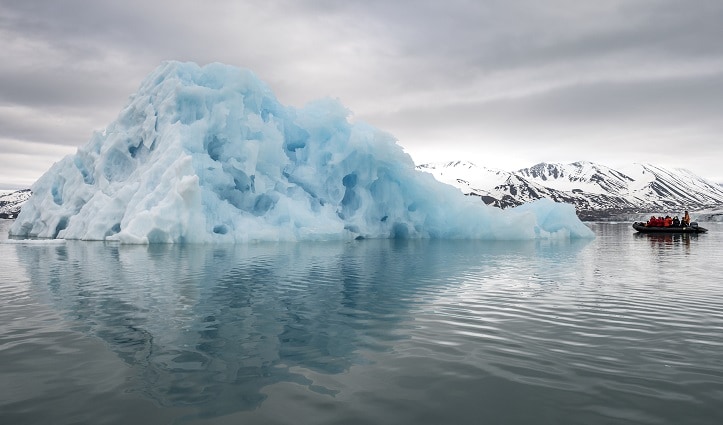 The Ice in he High Arctic is far more impressive than most visitors believe.  The region is home to the world’s fastest moving glaciers and the result icebergs create breath-taking scenery.  Some glacier walls are enormous; the 14th July Glacier on the Island of Spitsbergen being a wonderful example.  If it’s icebergs that intrigue you then a trip down the coast of Greenland to the Jakobshavn Glacier on the west side or into Scoresbysund Fjord on the east will have you searching for additional memory cards.

If you enjoyed the ice scenery in the Antarctic you will love it here as well.

Note: Please ensure you are adequately dressed as it can get cold; waterproof pants are essential

A SELECTION OF SHIPS 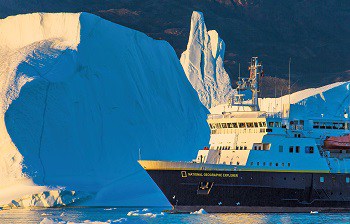 These luxurious ships (National Geographic Explorer and Sea Spirit) combine more traditional-style ‘cruising’ with an Arctic adventure.  They offer large, very comfortable cabins with en-suite facilities and many have private balconies. The experienced expedition team enable you to explore Spitsbergen, Greenland, Iceland and the Canadian High Arctic with Zodiac dinghies and come home to an exquisite ship with superior comfort and excellent cuisine options.

Expedition ships have a greater emphasis on maximising time off the vessel or out on deck. The expedition team works closely with the ship’s captain and crew to get you out exploring on the Zodiac dinghies and on shore as much as possible. Most voyages also offer kayaking. Cabins are simple and comfortable, the food excellent. The ships are stable, fast and manoeuvrable. 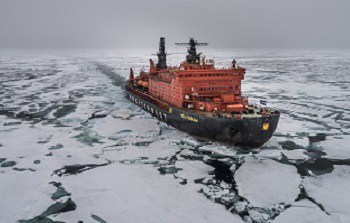 The 50 Years of Victory is the largest and most modern and powerful nuclear-powered icebreaker in the world. The “Victory” is a new (launched in 1993) generation ship, an upgrade of the Arktika-class. The spoon-shaped bow of the “Victory” is designed for greater icebreaking ability and makes the ship capable to force its way through 2.5 meters thick ice fields, necessary to access the the ‘top of the world’, the North Pole.

Plan My Trip
Call us today to discuss your holiday to Antarctica, The Falkland Islands or South Georgia