We all travel for different reasons. Whether to escape our daily grind, indulge in a passion like food, dance or photography, learn a new language or bring to life scenes we see in movies and documentaries, we each have our own motivations for wanting to leave the comforts of home. And just as unique to us are the great memories that stay with us, the highlight moment or day we will never forget. For me, that day was spent on a tiny speck of land in the middle of the South Atlantic Ocean. With no permanent human inhabitants, it is home to the world’s largest colonies of king penguins, elephant seals weighing more than a mid-sized car and the critically endangered wandering albatross, the proud owner of the largest wing span of any bird. This is South Georgia, a place often overlooked by even the most intrepid travellers and wildlife enthusiasts. A haven for many mammals and birds and a geographical wonder – its rugged peaks rearing thousands of metres out of the ocean. Reached by a two-day boat journey from the Falkland Islands or Antarctic Peninsula, it is remote, wild and breathtakingly stunning. 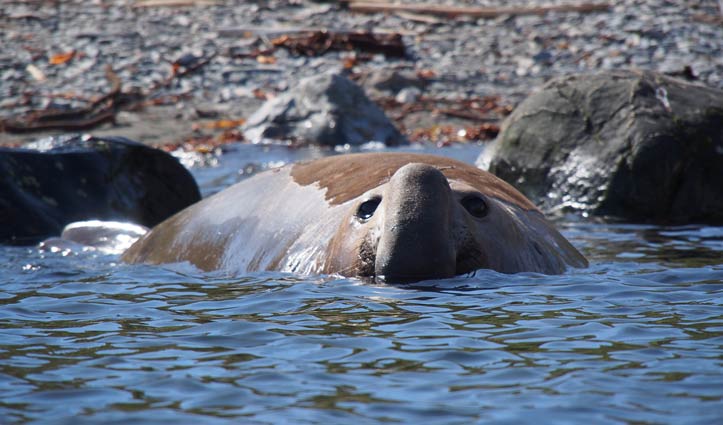 On the day – MY day – we left our expedition ship, the Akademik Ioffe, by Zodiac into beautiful Godthul Harbour. Steep rock faces surround the natural harbour and jagged mountains rear up out of the impossibly clear water, capped with snow and dotted with curious wildlife. The harbour forms a natural amphitheatre where the elephant seals deep roaring and the ever present calls of birdlife echo from one side to the other, travelling across the sparkling surface of the sea. I had the joy of experiencing Godthul from the water as part of the kayaking group. The sea was almost mirror smooth and crystal clear – you could see at least 10 metres down to the seabed where swirls of kelp cleared, allowing you into the underwater lives of the playful fur seal pups and speedy gentoo penguins, fishing for their chick’s dinner. 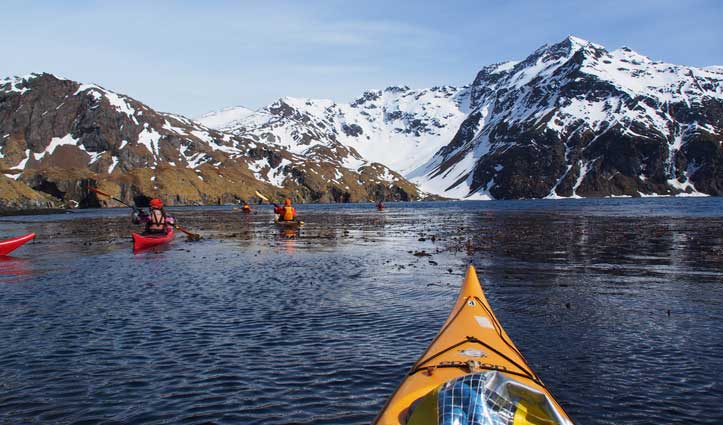 After being welcomed on board with a hot cup of soup as we climbed on deck, a quick shower to warm up and a delicious lunch, we repositioned the boat and made our way to what was promised to be another highlight, Gold Harbour. And it did not disappoint. Writing about this now gives me goose bumps; it’s so comforting to know that places as scenically spectacular, rugged, and rich in exotic, wild and totally unafraid wildlife in their thousands exist. Enormous hanging glaciers cling to the side of sky high cliffs setting the backdrop for the most crowded beach I’ve ever seen. This stretch of sand was almost impossible to reach by Zodiac because we could hardly find a space clear of elephant seals to land. And just back from the shore with a view down over the elephant seals, tens of thousands of king penguins and their chicks crowded the sand. Huge gatherings of fluffy brown chicks huddled together in ‘the crèche’ finding safety in numbers. 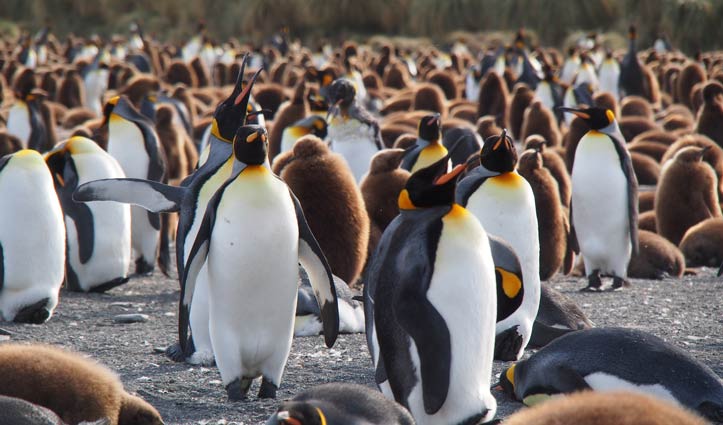 Some curious and excited to see us – the first expedition of the season –wandering straight up to us, as if eager to make it to the front page of a brochure or into a frame on our lounge room wall. Gold Harbour was all I had hoped it would be. And as if the day weren’t already spectacular enough, it ended with our captain, over the PA in his rich Russian accent, inviting everybody onto the bow of the boat for a cocktail party as we circumnavigated the first big iceberg of the voyage. With the sky still bright and the energy electric, music played while the barmen happily poured hot toddies for everyone. Our captain perfectly navigated the Ioffe around a spectacular blue iceberg, bigger than the vessel itself and temporary home to a colony of chin strap penguins. As the light began to fade and the colours of the iceberg changed from light to deep blue, I put my camera down and stepped away from the buzz of the party to let the day sink in. Regardless of the travel I’ve already done and whatever travel I do in the future, this day will stand out in my mind as a highlight. I’m so very grateful to have experienced it. Author: Hayley Crowden – Antarctica Travel Centre 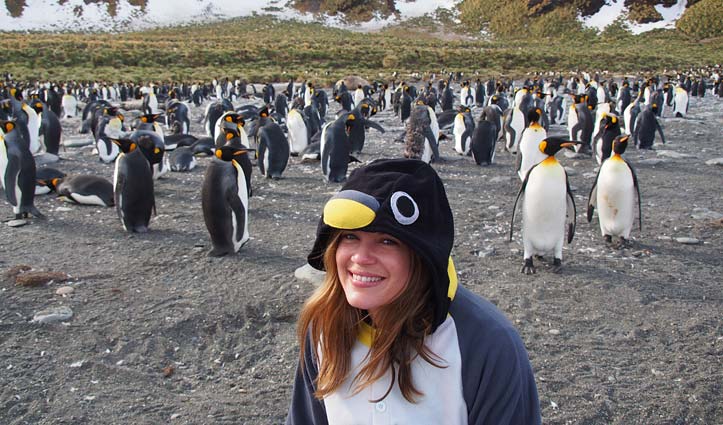