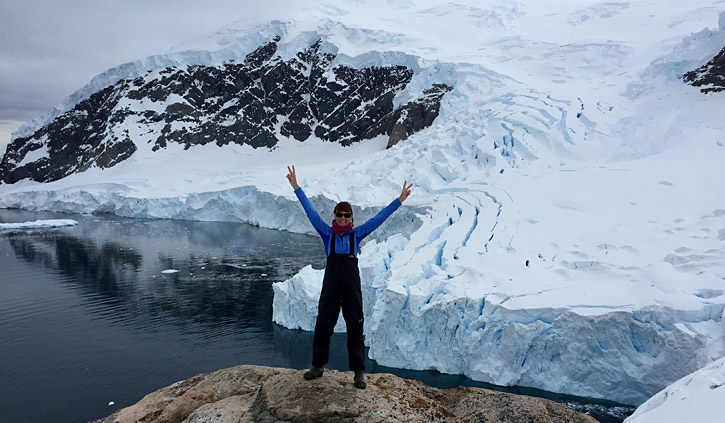 My inaugural cruise to Antarctica was in 2004, and nothing could prepare me for the magic that it held. I was then lucky enough to return in both 2012 and 2019. Each time was uniquely different and the magnificent glaciers, beautiful icebergs, impressive mountains and wildlife encounters all contribute to the allure of the Antarctic continent. In my 2012 journey south I kayaked close to icebergs, camped on the ice and plucked up the courage to participate in the polar plunge.

Up until my 2019 trip I had previously been to the Peninsula and the Weddell Sea but this time I sailed to the Falkland Islands, South Georgia and again to the Peninsula. Visiting the subantarctic islands added a new element to the enchantment of the deep south. The Falkland Islands has scattered reminders of the 1982 Falklands War, an excellent museum in Port Stanley and some beautiful walks in particular to Gypsy Cove which takes in ship wrecks from the past, and an abundance of wildlife. I think Port Stanley could even be more British than Britain. They serve great fish and chips in many pubs, with squid being their main industry outside of tourism.

South Georgia holds an important place in Polar history, in April 1915 Sir Ernest Shackleton sailed 1,500kms from Elephant Island (north of the Antarctic Peninsula) to King Haakon Bay on South Georgia, where he hiked across the spine of the island to Stromness whaling station. From here he returned to Argentina to try to find a suitable ship to rescue the rest of his crew from the Endurance. In August the same year he returned to rescue his crew and miraculously all of them survived. In 1922, Shackleton embarked on his final expedition, where he sadly died off the coast of South Georgia – he is now buried in the Grytviken cemetery where we paid our respects. We were fortunate enough to walk in part of his footsteps from Fortuna bay to Stromness. In South Georgia we also witnessed approximately 100,000 breeding King Penguins and encountered around 300 humpback whales and a pod of orcas decided to inquisitively dive under our Zodiac.

Setting foot on the Antarctic Peninsula is a bucket list item for many but no one can really prepare themselves for this incredible experience. Close encounters with curious penguins, playful seals and breaching whales creates a wildlife experience like no other. Antarctica and the surrounding islands of the Falklands and South Georgia are some of the last true wilderness we have remaining, a sacred place of peace, pristine purity, global co-operation, scientific observation and preservation. Undoubtedly the holiday of a lifetime all delivered on an ice platter!