04 Oct Flight to the Emperor Penguins

Flight to the Emperor Penguins

We were walking across fast sea-ice towards Seymour Island in the Weddell Sea on the Eastern side of the Antarctic Peninsula, when we received the message to head back to the ship, the Kapitan Khlebnikov, which was ‘parked’ in the sea-ice.  The plan had changed so we were soon to be heading to Snow Hill Island to visit the Emperor Penguin colony. 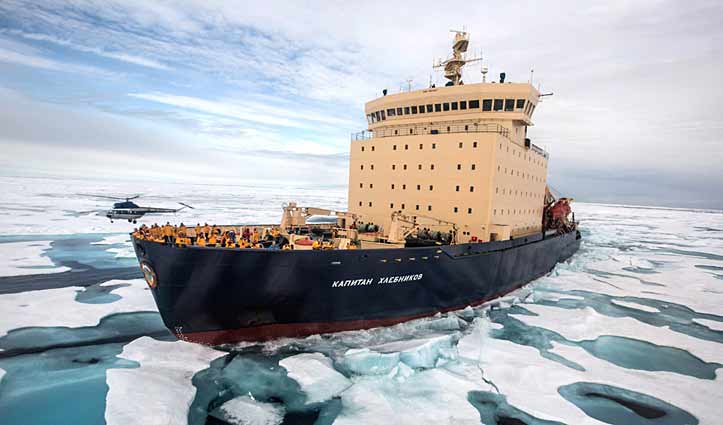 The anticipation grew as we waited for our group to be called to climb in to the helicopter for the 10 minute flight from the ship to the sea-ice near Snow Hill Island.  The flight alone was magical, flying over a sea of ice (quite literally) and with amazing views over the Antarctic Peninsula. 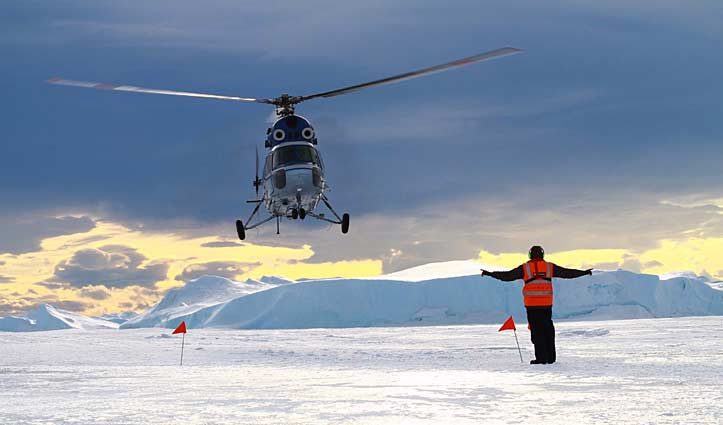 Soon we were descending to land a couple of kilometres from the Emperor Penguin rookery; to avoid disturbance of the colony.  For me this was the realisation of a long-held dream of visiting Emperor penguins.  Eager to get going I followed the line of flags that are set to guide everyone to the colony, which in clear weather is easy to see and as the conditions can change quickly a very worthwhile precaution. 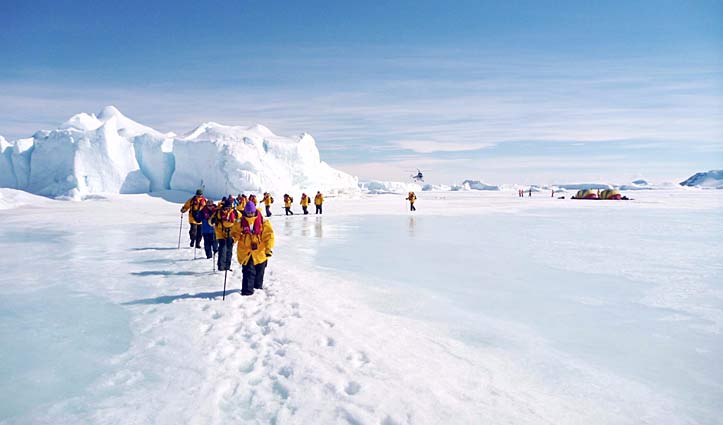 Even on the walk to the rookery adult Emperor penguins would very calmly drift past as they toboggan (far more efficient and effective than walking) their way their way to and from the colony to the edge of the sea-ice (at that time a distance of almost 40kms).  Soon I was at the rookery with as many as 600 adult Emperor penguins and perhaps 400 juveniles; grey fluffy bundles and at that time about half the size of their parents. 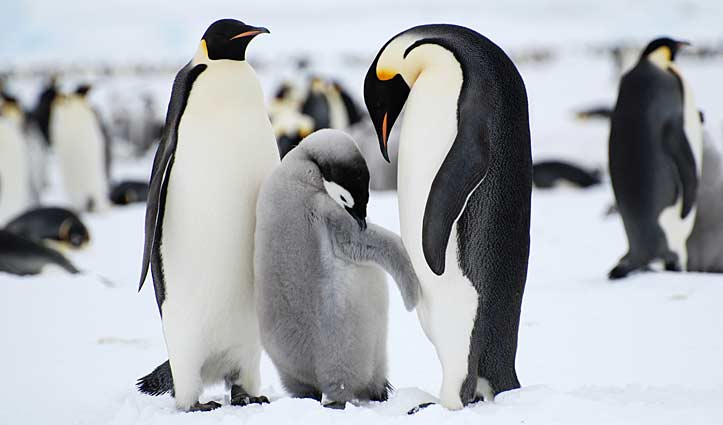 Adults were continually arriving, being greeted by trumpeting calls (how they recognize one another) of their mate, and departing to fetch more krill for their ever growing and ever demanding chick.  From a photography perspective it was hard to know where to look and gradually I realised I had time.  So I sat down and just watched life in an Emperor penguin colony unfold. 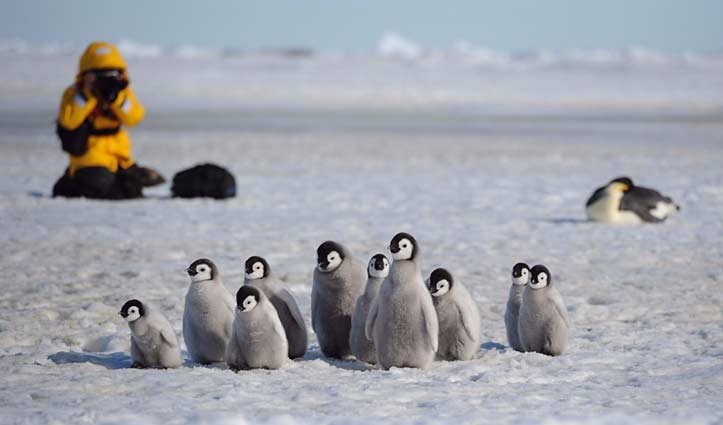 Antarctic Skuas buzzed the colony, two leopard seals slid through accompanied by the trumpeting calls of the adults and a higher pitched twitter from the juveniles.  I was busy concentrating on taking images when one of my fellow expeditioners suggested a slowly turn around; one of the juveniles had decided I needed closer investigation and was pecking at my backpack.  Whilst we could only approach to 5 metres, there was nothing to stop juveniles or adults coming closer; hopefully it demonstrates they have no fear of their visitors. 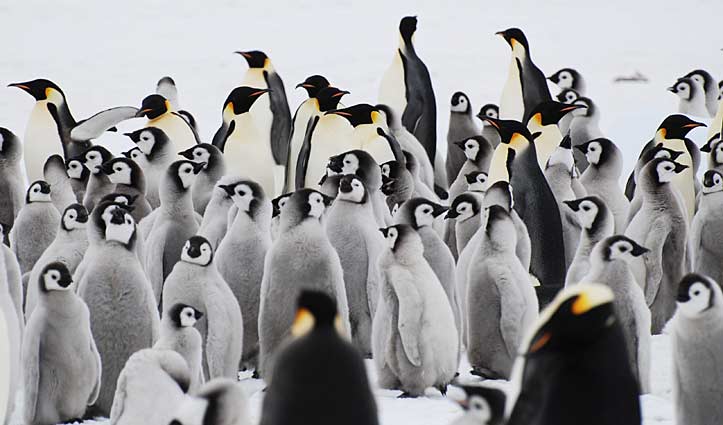 Occasionally a very loud boom would be heard as the sea ice moved/cracked, reminding us we were sitting on top of the Weddell Sea.  It was perfectly safe and after a few such booms it was clear it was just another aspect of this incredible journey. 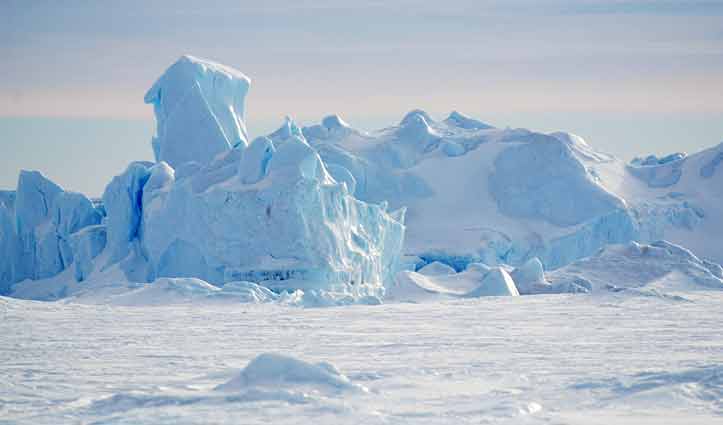 Two and a half hours quickly passed before it was time for the last flight back to the ship.  The wind was picking up and by the time we landed on the helipad it was blowing hard – our experienced pilot made light of the conditions and it demonstrated why any visit to the Snow Hill Emperor penguin colony is dependent upon the weather. 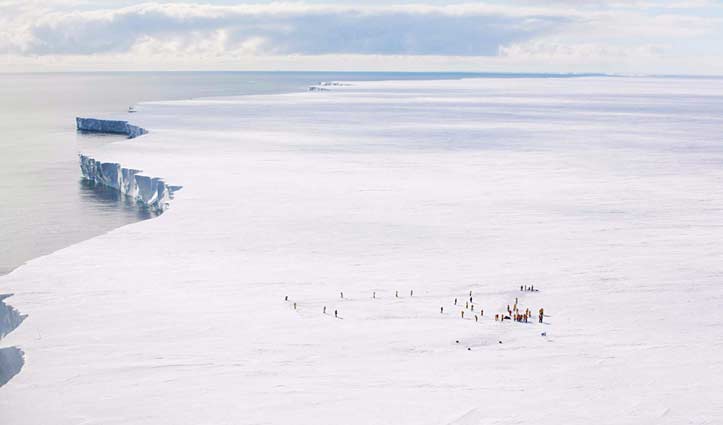 We made visits to other sites on the Peninsula (and the focus is definitely Emperor penguins) and we were flown to the top of a massive tabular iceberg, apparently all part of this unique voyage.