Often described as the “Galapagos of the Southern Ocean”, the Sub-Antarctic Islands of Australia and New Zealand are among some of the best preserved and protected environments on the planet. This is where you will experience scenery and wildlife like nowhere else on earth. Return home via Hobart and its interesting mix of elegant heritage sandstone buildings and modern architecture. 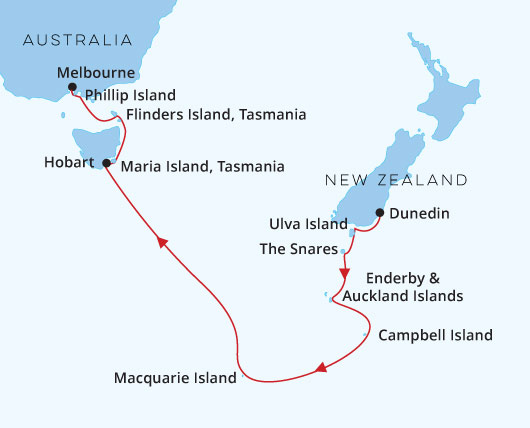 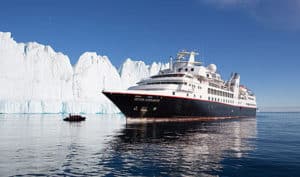 The Silver Explorer was built in Finland in 1989 and was designed specifically for navigating waters in some of the world’s most remote destinations including Antarctica, the Falkland Islands and South Georgia. The vessel was acquired by Silversea in late 2007 and has been fully refurbished in 2017 as an elegant luxury expedition cruise ship. Its ice-strengthened hull enables the ship to safely push through ice floes with ease, while a fleet of Zodiac boats allows guests to visit even the most incredible locations accompanied by the expert Expedition Team. Accommodation aboard comprises 72 spacious suites located across 4 decks, all with ocean views and some with private balconies. Passengers will also find an excellent range of facilities aboard including two lounges, restaurant, presentation theatre, library/Internet, spa, fitness centre, two Jacuzzi’s, and outdoor viewing areas. 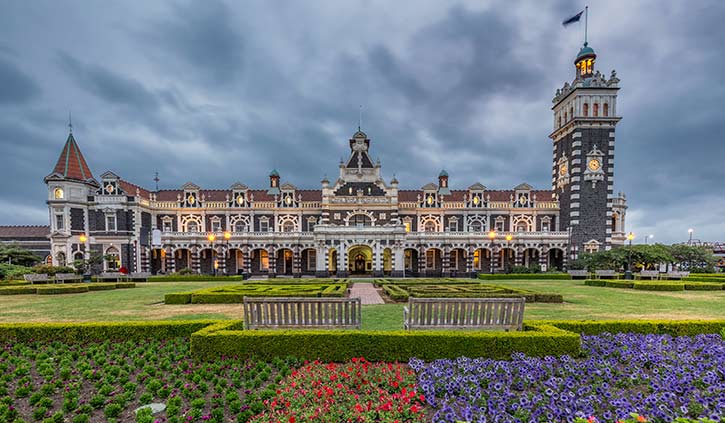 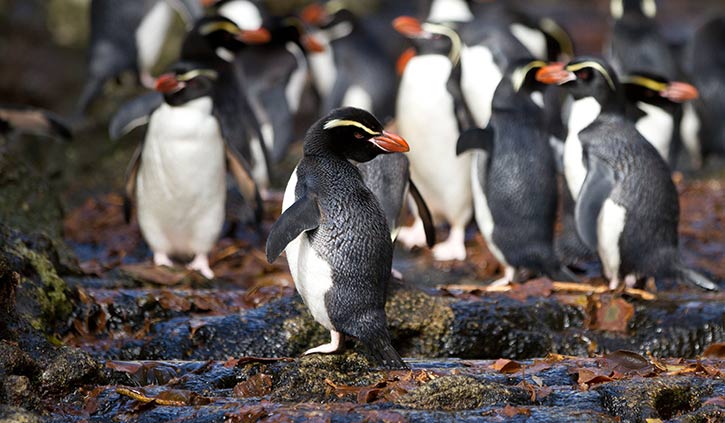 Here on the northernmost of New Zealand’s subantarctic islands is some of the countries most untouched and pristine areas on offer. Land mammals have never been introduced on the Snares Islands, making it a busy breeding ground for local birds, marine mammals and invertebrates. Shearwaters, petrels and the endemic Snares Crested Penguins are abundant on the islands along with four albatross species listed as breeding here. New Zealand fur seals breed on the shore and the New Zealand sea lions have been known to pop in for a visit on the islands. There are also several invertebrate species which can only be found on the island including a species of weevil which can only be found on one species of plant in the whole world- on Broughton Island. Unique plants are in abundance on these islands, which take up an approximate 840 acres. 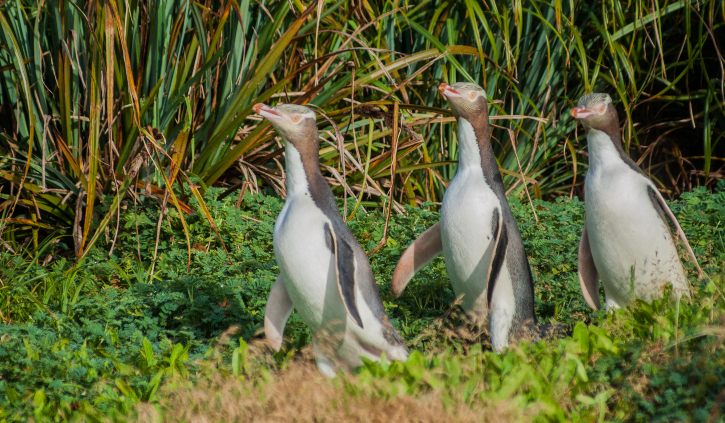 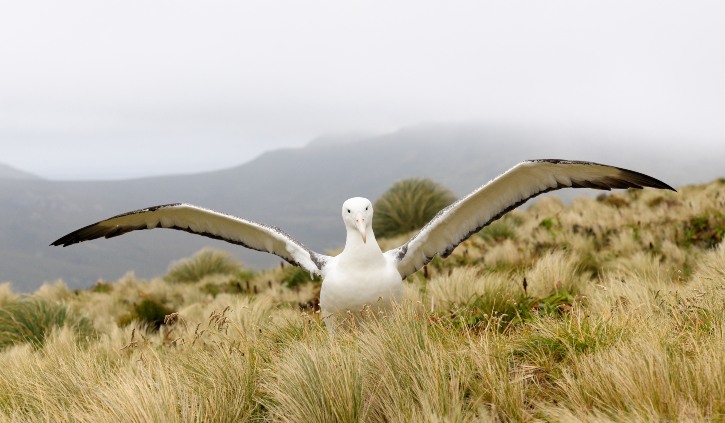 Well known as the home of the albatross, Campbell Island has a long and fascinating history. Six species of albatross, including the largest- the southern royal call the island home along with the Campbell Island teal and the Campbell Island snipe. Farming started on the island in 1895 but was later abandoned in 1931 due to unreliable transport systems, accidents and the world-wide recession. As a result of farming, there are approximately 50 introduced species of plants on the inland, but an impressive 128 native vascular plants have been recorded on Campbell Island. English botanist, Joseph Hooker described the island as having a “flora display second  to none outside the tropics.” This windswept, remote and rugged island remains an important part of the New Zealand sub-antarctic group. 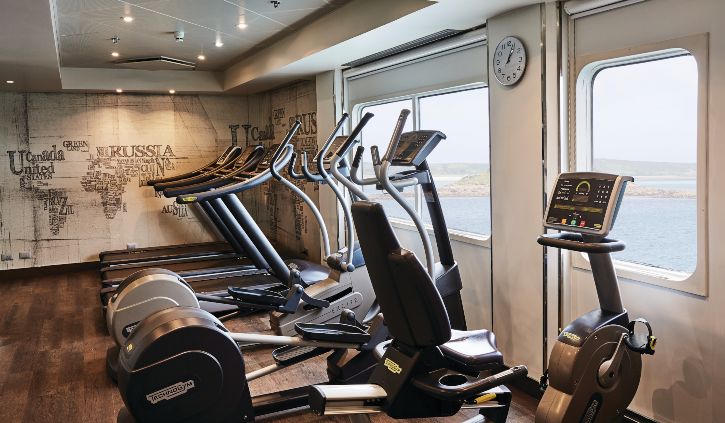 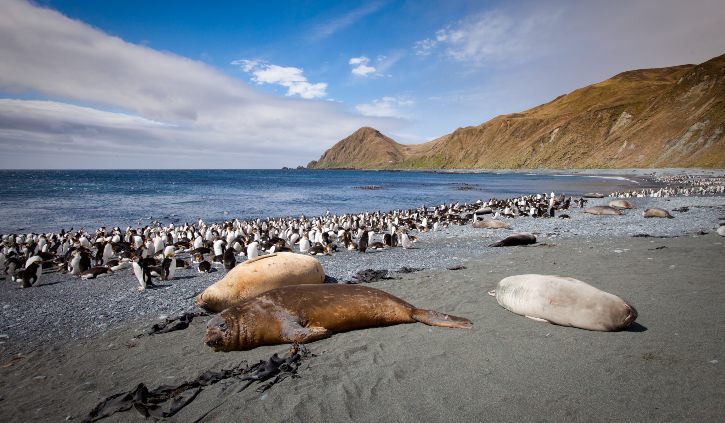 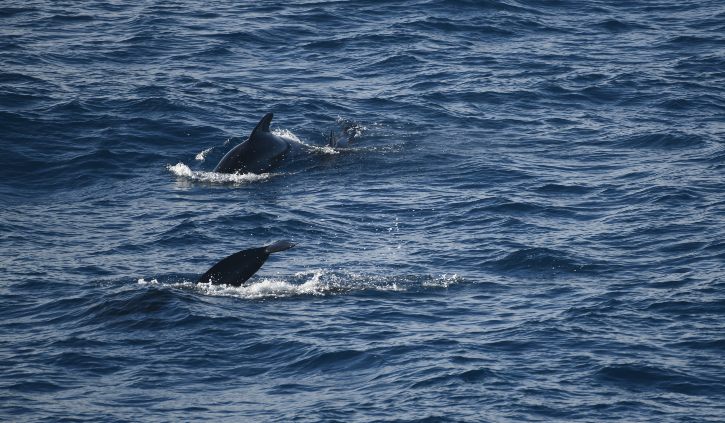 Straddling the Derwent River at the foot of Mt. Wellington’s forested slopes, Hobart was founded as a penal settlement in 1803. It’s the second-oldest city in the country after Sydney, and it certainly rivals its mainland counterpart as Australia’s most beautiful state capital. Close-set colonial brick-and-sandstone shops and homes line the narrow, quiet streets, creating a genteel setting for this historic city of 215,000. Life revolves around the broad Derwent River port, one of the deepest harbors in the world. Here warehouses that once stored Hobart’s major exports of fruit, wool, and corn and products from the city’s former whaling fleet still stand alongside the wharf today. Hobart sparkles between Christmas and New Year’s—summer Down Under—during the annual Sydney-to-Hobart yacht race. 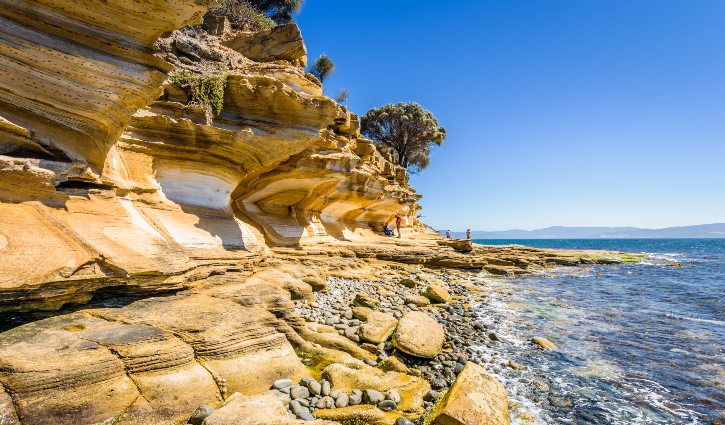 Located off the eastern coast of Tasmania, Maria Island is both a natural wildlife sanctuary and an important historical site with the best preserved convict probation station at Darlington, a UNESCO World Heritage Site. In the 1960s the island was chosen to be a haven for plants and animals and a number of threatened species have been introduced, including Forester kangaroos, Bennett’s wallabies and Tasmanian devils. Eleven Tasmania endemics, including one of Australia’s smallest birds, the threatened Forty-spotted Pardaloten can often be seen in the park along with wombats. A geological attraction is the Triassic sandstone of the Painted Cliffs. 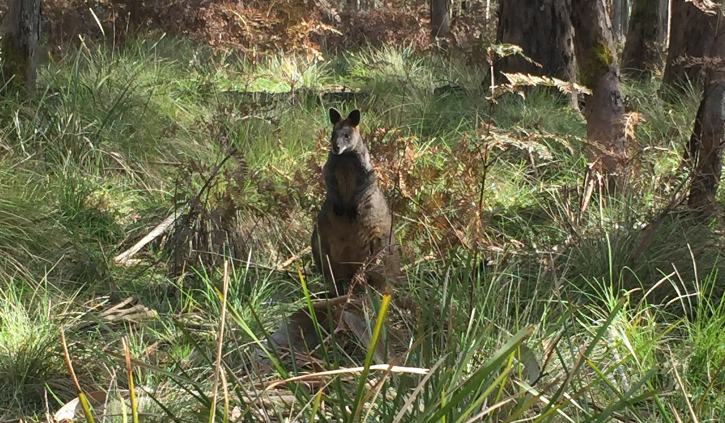 Flinders Island is one of 52 islands in the Bass Strait’s Furneaux Group, north-east of Tasmania. With a pleasant climate throughout the year, Flinders Island has sparkling beaches, rugged ranges, abundant wildlife, flora and clear waters. The Strzelecki National Park, which covers roughly 7,414 hectares, has a trail going to the top of the highest peak from where one has amazing views of the Bass Strait and its islands. Some 200 bird species have been recorded, including thousands of Short-tailed Shearwater and the Tasmania endemics Tasmanian Thornbill and Forty-spotted Pardalote. There are an abundance of native wallabies jumping around. 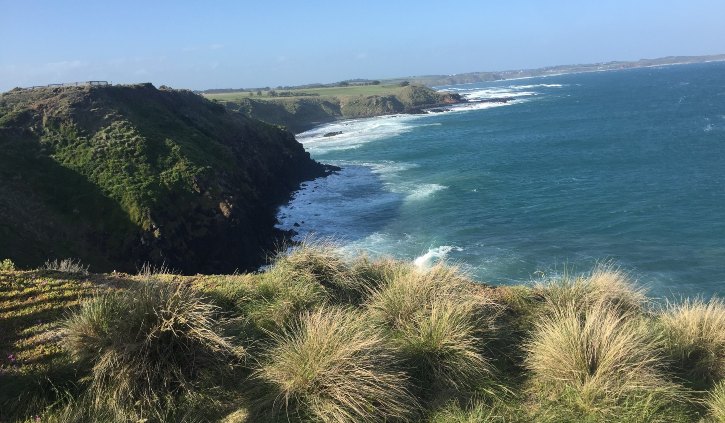 Your first sight of Phillip Island’s prize asset – its parade of adorable penguins skipping across the sand – will be just one of many unforgettable experiences from your time on this stunning island. Located just to the south of cultured Melbourne, the southern ocean’s rollers have hewn a rugged, dramatic shoreline here, and you’ll be itching to explore as soon as you lay eyes upon it. 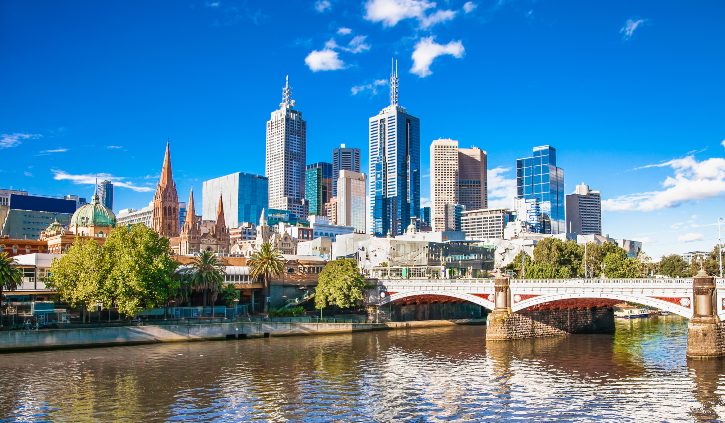 Consistently rated among the “world’s most livable cities” in quality-of-life surveys, Melbourne is built on a coastal plain at the top of the giant horseshoe of Port Phillip Bay. The city center is an orderly grid of streets where the state parliament, banks, multinational corporations, and splendid Victorian buildings that sprang up in the wake of the gold rush now stand. This is Melbourne’s heart, which you can explore at a leisurely pace in a couple of days. In Southbank, one of the newer precincts south of the city center, the Southgate development of bars, restaurants, and shops has refocused Melbourne’s vision on the Yarra River. Once a blighted stretch of factories and run-down warehouses, the southern bank of the river is now a vibrant, exciting part of the city, and the river itself is finally taking its rightful place in Melbourne’s psyche.