Antarctica Travel Centre can look after all aspects of your holiday; the voyage, flights, pre and post accommodation, transfers and travel insurance.

We start by asking you lots of questions – where to (just the Antarctic Peninsula, or a voyage with the lot – Antarctica, Falklands & South Georgia), when, for how long, what standard and style of ship or cabin, and whether you have any particular personal interests that may help select the voyage or ship. Once we have a good understanding of just what you’re looking for, we can begin to select the best voyage to meet your time and budget requirements and, most importantly, that will deliver interest and enjoyment in an experience to exceed your expectations.

Please book early: Many of these ships book out 12-18 months in advance, particularly over the December/January period. Please also consider that there may be only a small number of cabins in the category you would prefer.

If you’re thinking of travelling over the Christmas and New Year period our advice is simply to book as early as you can, even a year or more, and we can add flights as soon as they become available.

So, to reiterate, BOOK EARLY to allow us to put together the very best itinerary for you.

In simple terms the Antarctic Peninsula, Falkland Islands and South Georgia open up for exploration in late October and early November and the season runs through until March (i.e. our Australian summer) when the shortening days and encroaching sea ice close this magical place to all but the hardiest visitor.  There is no bad time to go and below you’ll find a summary of the three seasons and the benefits of travelling at those times. 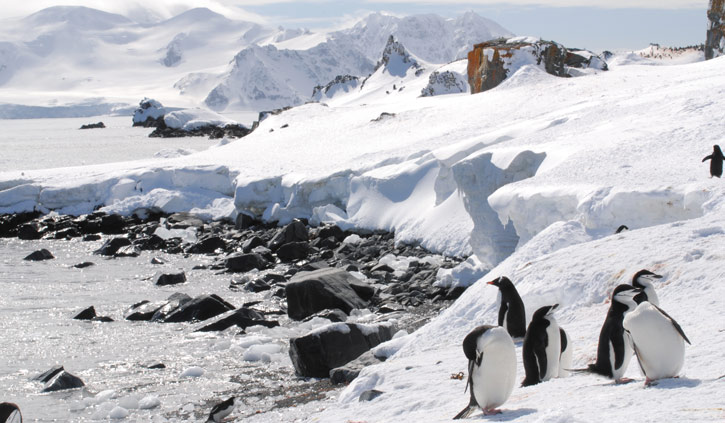 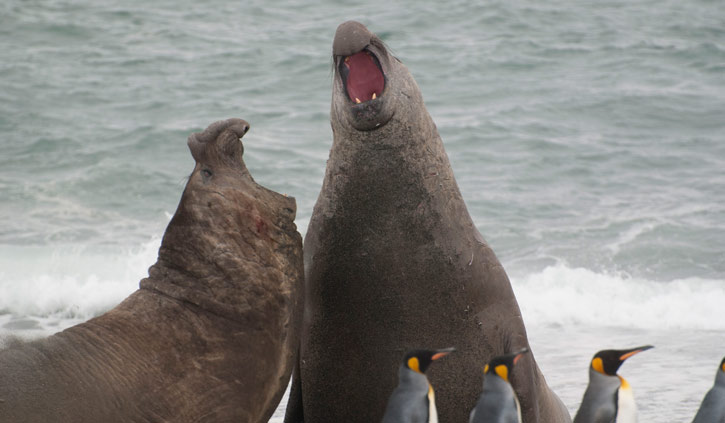 ANTARCTIC PENINSULA
In October and November the pack ice starts to break up and allows ice-strengthened ships to access a pristine landscape unexplored by humans since March the previous season.

As the season progresses more and more penguins (Adelie, chinstrap and gentoo) return to their colonies and are busy at first with courtship and mating and not long after settle to incubate their eggs.

SOUTH GEORGIA
If you would like to witness the dominant bull elephant seals battling for control of a harem of females on the beaches of South Georgia, you must take an early season voyage – leave it too long and the bulls will have headed out to sea. On the Peninsula the penguins are arriving and beginning their courtship displays.  Just as on the Antarctic Peninsula the penguins are also busy courting, mating and laying eggs.  Last seasons juveniles will still be in the colonies.  Wandering Albatross may also be seen re-establishing their bonds with their life-long partners.  Fur seals will be particularly active with females mating soon after giving berth to the new season’s young.

FALKLAND ISLANDS
Just as on the Peninsula and South Georgia activity on the Falklands Islands is well underway in October (being a little further to the North).  Five species of penguin (Rock-hopper gentoo, Magellanic, macaroni and king) will all be busy.  Several migratory bird species will also have arrived. 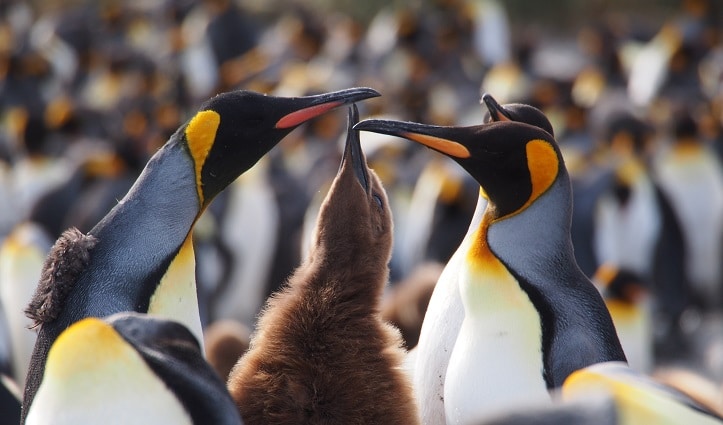 ANTARCTIC PENINSULA
As the season progresses the daylight hours increase which all of the Antarctic peninsula’s wildlife makes use of; the beaches and hillsides are now hectic with tens of thousands (sometimes more) of penguins (Adelie, gentoo & chinstrap).  Not all penguins chicks hatch at the same time, as you go further south they generally hatch a little later (also as the tops of hills clear of snow and ice earlier than the base the penguins that grab the ‘top spots’ often have chicks earlier than those at the bottom of the hill).

With both parents at first taking turns to incubate and soon making ever more frequent fishing trips the colonies get busier and the chicks larger.  Chicks grow very quickly and as soon as they are mobile it can be very entertaining, quite chubby, slightly ungainly, hungry juveniles chasing their parents for some more krill.

Seals, skuas, petrels and penguins are all busy attending to their sub-adult young as the short Antarctic ‘summer’ will soon be over. Whales are ever present and as the season progresses they start to become more inquisitive (partially as they’ve been feeding for the last 2 months).

SOUTH GEORGIA
The early season snow will slowly be lost at lower levels (fresh snow can fall at any time), only the peaks will remain snow-capped. This can mean trekking opportunities are increased and the weather will always determine what’s possible (safe). Temperatures can vary significantly and over a very short period of time; if it’s sunny and the winds are lights (a relatively rare occurrence) it will be quite warm (10-15 degrees Celsius), if it’s cloudy and there are strong winds and snow it can feel bitterly cold (we’ll advise so you have appropriate clothing).

The beaches of South Georgia are soon littered with fur seal pups. The adult males of fur and elephant seals having completed their task have returned to the southern ocean for a much needed meal (the large bull elephant seals can lose over a third of their body weight during the breeding season).

King Penguins
Many of South Georgia’s beaches are also home to vast colonies of king penguins, several in their tens of thousands. Due to king penguins unsynchronised breeding and a 13-16 month breeding cycle you can usually witness courting, penguins with eggs in pouches above their feet (laid from November to April), brow fluffy chicks and adults throughout the year. The number of young in the colonies fluctuates (highest number in Dec/Jan/Feb) with larger brown fluffy juveniles forming large crèches whilst their parents are ‘gone fishing’.

FALKLAND ISLANDS
As with South Georgia the days are long and the temperatures generally higher (average 12 degrees Celsius). The same systems that eventually reach South Georgia will also affect the Falkland Islands and a warm summer’s day can feel quite like a southern Australian coast (Phillip Island comes to mind) and it can still very occasionally drop below freezing.

Seals (seal lions and elephant seals), penguins (king, Gentoo, rock-hopper, macaroni & Magellanic) and perhaps over half a million black –browed albatross will all be busy raising their young. 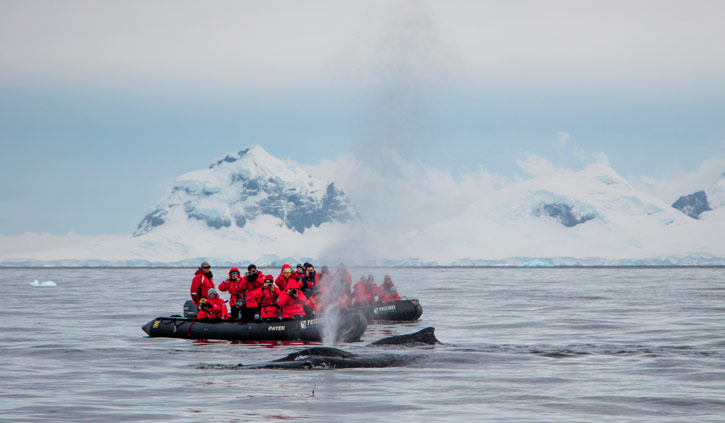 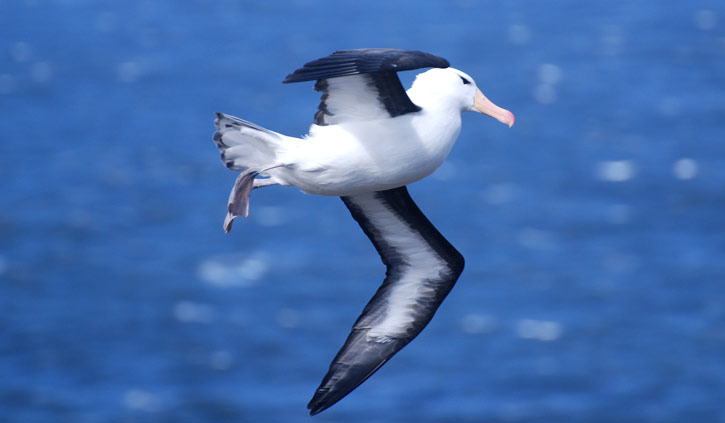 Please don’t assume ‘late season’ equates to bad time to go – it isn’t. The days are a little shorter and it’s still light for more than 12 hours of the day, plenty of time for all your excursions.

The penguin colonies will have large chicks that are losing their down and preparing to enter the place they are most at home in – the great southern ocean.

Leopard seals are also quite prominent during this time; simply as they know that sub-adult penguins learning to swim are easy prey. Fortunately for the penguins the number of these apex predators is relatively low.

Whales
It seems that by the end of February and during March most of the whales that are there for the summer feeding have achieved that goal and have more time to be inquisitive of the other visitors that don’t dive below the surface. Spy-hopping humpbacks are probably the most common easily seen whale species. Six other species can be seen (minke, orca, sei, sperm and very occasionally blue).

The other wonderful place to see whales is near the Antarctic convergence, where the warm northern waters meet to called southern water and this causes an upwelling of nutrient rich water which the whales love.

Given both Island groups lie much further north (than the Antarctic Peninsula) the breeding seasons are extended a little. King penguin colonies will have sub-adult chicks and late season chicks.

Whales, who have been busy feeding throughout the Antarctic summer, seem to have more time now to investigate their visitors (us!); leopard seals have an easy time catching juvenile penguins who are taking their first swim – and then the brief season abruptly comes to a close.

It’s difficult to provide a weather chart that would be valuable as Antarctica is a place of extremes. That said, on the Peninsula the daytime temperatures are often well above freezing. There is a saying that is quite apt – “There’s no such thing as bad weather, just inappropriate clothing”. We will advise what you should pack (and what will be provided to you on board) to ensure the above maxim does not apply to you.

The Drake Passage can be the ‘Drake Lake’ (calm) or the ‘Drake Shake’ (rough) although, surprisingly, many voyages have relatively smooth crossings.

We have access to a wide range of wholesale airfares and have excellent relationships with our key airline partners.
Our main airline partner is LATAM Airlines.

Irrespective of whether you book directly with us or with your preferred travel agent, we’ll want to know the details of all of your fights – flight times frequently change and we want to make sure your transfers and other arrangements are amended accordingly.

NOTE: We only book flights in conjunction with tailor-made land (and sea) arrangements booked through us – we don’t book just flights, sorry.

LATAM Airlines have daily services from Sydney to Santiago.  Most flights fly via Auckland, with direct services in conjunction with Qantas.  For those of you who live in, or near to, Melbourne the good news is that LATAM now fly directly to Santiago three times a week.

LATAM Airlines have an new fleet of planes as well as many new airports throughout South America.  If flying to join an Antarctic voyage you will need to fly first to Santiago, Chile’s modern capital, and then onto either Buenos Aires and then Ushuaia, or to Punta Arenas if flying to King George Island, on the Antarctic Peninsula, or to Mount Pleasant in the Falkland Islands to board your chosen ship.

It’s worth noting that if you’re adding several flights within South America it’s worth considering flying on one of QANTAS’ codeshare flights with LATAM to enable you to have access to LATAM’s Airpass within South America.  One of our specialists will be happy to explain the benefits as well as booking all of your flights to ensure they link appropriately with your chosen Antarctic voyage.  It is our company policy to have all clients arrive into the departure port/city at least one day prior to the voyage departure date – we do not want you to watch your ‘trip of a lifetime’ sailing down the Beagle Channel without you on-board.

Air New Zealand fly from Auckland to Buenos Aires (Argentina) three times a week.  If you are joining a voyage departing from Ushuaia this can be a good option; as if you fly (with LATAM or QANTAS) via Santiago you still have to fly to Buenos Aires (2 hours) before flying south to Ushuaia (3 hours 35 minutes). 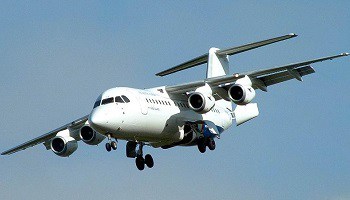 A BAE-146 aircraft is used for flights from Punta Arenas (Chile) to King George Island in the South Shetland Islands.  The plane was manufactured in the UK by British Aerospace (now part of BAE Systems). It is a high-wing aircraft with very short runway requirements, which makes it particularly suited for landing and take-off in Antarctica. The aircraft is expertly operated by Aerovias DAP, which has more than 20 years of experience flying in Patagonia and Antarctica.
Weather effected flight Delays

While very few Antarctica Fly and Cruise departure have ever been cancelled due to weather conditions, some departures have experienced delays of up to three days. It is important that prospective participants understand that weather conditions could impact the operation. Should weather delay a departure, contingency plans will be put into operation. Either leg of the flight can be delayed so flexibility should be allowed when returning home (which is why a night in Punta Arenas either side of your voyage is necessary).

Please also note that as the plane takes a maximum of 70 passengers – larger ships have to utilise two flights – with double the chance of delays on flight days.